Unfortunately more bad news from yesterday (Thursday, June 21) to continue the previous theme of falls on ski mountaineering terrain (although this time both incidents involved only climbers, not skiers).

This time the injuries were not at all life-threatening, especially since immediate extrication/evacuation was available from members of Portland Mountain Rescue, who were already on site at the time of the incident . . . to spread the ashes of the well-known climber who died exactly one week earlier from a fall on the same route.

The injured climber was wearing a bike helmet instead of a climbing helmet, and using a ski pole instead of an ice axe.  Another climber who witnessed the fall had already turned back from a summit attempt on account of overly softening snow.  Based on one account, at least the victim's inability to self-arrest at all had the benefit of getting him going "fast enough to fly over a crevasse near the end of his slip" -- all of which would actually be kind of amusing were it not for the events that started about four-and-a-half hours later on a volcano to the north...

Four climbers from Waco TX were descending from the summit via the Emmons Glacier when the two women fell into a crevasse, while the two men were able to arrest the fall.  One climber called in a rescue on a cell phone, and by about three hours later, park ranger Nick Hall had heroically rescued the climbers from the crevasse, and was loading some of them into a Chinook helicopter from Joint Base Lewis-McChord.

At 4:59, this appeared to be a happy end to an already confusing story.  Some of the as-yet-unanswered questions:


Unfortunately, the story has a tragic ending, on some terrain whose dizzying exposure made me nervous at the time, and still does looking back it.
Although I don't know what the established route looks like this year on the Emmons, the 2009 route was pretty typical: 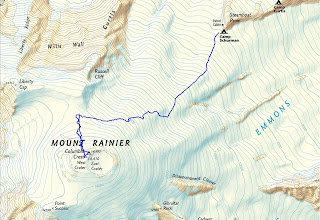 The traverse near the summit might seem kind of pointless on the map, but looking at the summit in this picture I took from the Sunrise area while touring a few days area, you can see how the traverse avoids some steeper terrain (and a tricky bergschrund) by heading toward a saddle, from which the summit is just up a very casual non-glaciated hill: 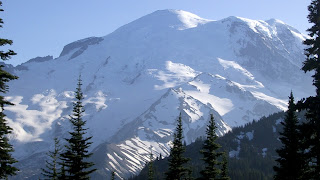 So skiing from the summit starts off with a ridiculously casual descent almost true north, then starting at around 13,600' a still fairly easy ski, cutting to the skier's right (i.e., east) across the fall line.  From a skiing difficultly standpoint, very similar to cutting across Mt Washington's NE Snowfield, toward the lower part of the East Snowfield, when skiing from the summit to Tuckerman Ravine.
The difference though is how I thought at the time that a fall there on the Emmons would be the equivalent of going all the way from the NE Snowfield to Route 16: 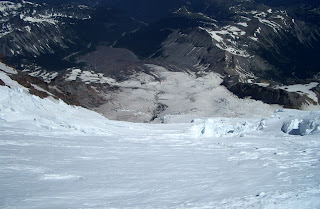 Unfortunately, that is exactly what happened to ranger Nick Hall, apparently in the process of loading one of the victims into a Chinook.
RIP ranger Nick, a true hero. 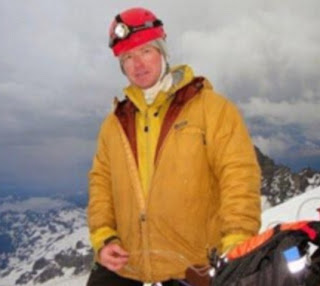 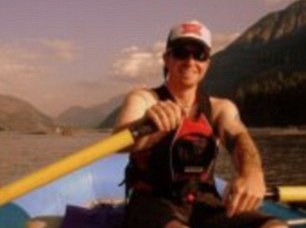