As I previously wrote, the review quiz for my ski patrol Mountain Travel & Rescue Course includes three questions with the theme of “Lions and Tiger and Bears, Oh My!” -- or, when animals attack:

Students tend to put down all sorts of terrifying species -- e.g., snakes -- for any or even all of these questions, even though the correct answers involve far less "impressive" animal species.

However, locale-specific knowledge is of course important, so beware of deadly creatures like the copperhead snake when visiting exotic locations such as . . . Mt Tom?

As if the mere presence of a copperhead snake at Mt Tom wasn't already terrifying enough, a hiker was indeed bitten, and treated with anti-venom at Bay State Hospital (site of Micayla's birth, toddler hernia operation, and -- most relevant to the current topic -- the only Level 1 trauma center in Western Mass).

And for the win, after being bitten, the hiker captured the snake and brought it down with him so that it could be identified (presumably by specifies, as opposed to whether it was a repeat offender or out on parole or something).

In case you were wondering, according to the City of Holyoke police, this is officially a Bad Idea (for reasons that should be obvious . . . to everyone except the hiker apparently).

Then again, I suppose none of this is all that surprising given the many extreme aspects of Mt Tom:  typical ski outing below (from February 8, 2011). 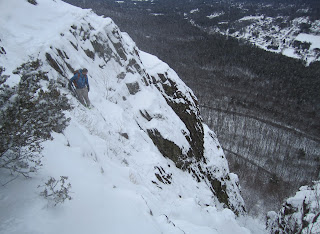 A hiker in western Massachusetts was bitten by a venomous snake Saturday evening, then caught the snake and brought it to authorities, according to Holyoke Police.
The man was bitten on his leg by a copperhead at Mount Tom State Reservation in Holyoke just after 5 p.m. Saturday, said Holyoke Police Lieutenant Larry Cournoyer.
After being bitten, the man “collected the snake and carried it down from where he was walking” so Animal Control authorities could identify it, Cournoyer said.
After the snake was identified as a copperhead, the hiker was taken to Baystate Medical Center in Springfield, where he was treated with the appropriate anti-venom, Cournoyer said.
Police do not know the man’s age or where he lives.
Although copperhead snakes are indigenous to the area, Cournoyer said local reports of copperhead bites are rare, adding that he could not recall any similar incidents in his 25 years as a police officer.
“It was cold last night, and snakes aren’t quite as active when they’re colder, so I’m assuming he stepped on the snake, which is easy to do in the woods due to the camouflaging nature of the snake,” Cournoyer said.
However, Cournoyer said capturing the snake, which put the hiker in danger of being bitten again, was a bad idea.
“You can use your cellphone and photograph the reptile so you don’t risk injury by messing with snakes,” Cournoyer said.
He said that copperhead venom is not typically fatal, especially with easy access to hospitals and anti-venoms, but said that the hiker could have become increasingly sick if he had not been treated.
According to the Centers for Disease Control and Prevention, an estimated 7,000 to 8,000 people are bitten by venomous snakes in the United States each year, with about five cases turning fatal.
Symptoms of venomous bites include pain and swelling at the wound, nausea and vomiting, labored breathing, blurred vision, increased salivation and sweating, and tingling or numbness in the face and limbs.
Posted by Jonathan S. Shefftz at 10:55 PM