The latest fatality count is up to 135 for the avalanche that buried a Pakistani military base.
Back in 2003, an Outside Magazine article recounted the horrors of the long-running conflict on the Siachen Glacier between Pakistan and India, whose origins were abetted by oropolitics (i.e., the "use and abuse of mountaineering for political purposes").
A cease fire has been in effect since that article came out, but given that most casualties were then caused by man versus mountain, the horrors have most likely continued unabated, as evidenced by this most recent avalanche.
Some excerpts follow below, along with an Indian military memorial plaque that prominently features Silvretta alpine touring ski bindings.  (The final excerpt is the most haunting.) 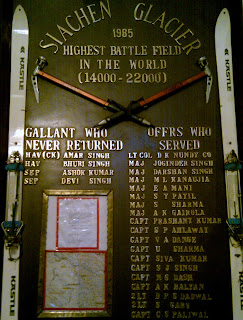 "But there's a reason these mountains remain untouched: They sit in the middle of a 250-square-mile war zone where India and Pakistan have been fighting for the past 19 years as part of their intractable dispute over the state of Kashmir. What might be a climber's paradise is instead the site of a harrowing and improbable siege, the highest and coldest combat theater in the history of the world."

"Never before have troops fought for such extended periods in such extreme physical conditions. At least twice a week a man dies, occasionally from bullets or artillery, but more often from an avalanche, a tumble into a crevasse, or a high-altitude sickness—perils usually faced only by elite climbers."

"Unlike mountaineers, who usually climb during the best weather, Siachen soldiers endure the worst the mountains can throw at them, year-round. Avalanches are frequent and terrifying; their thunder is so great that it's often impossible to distinguish from shelling. Blizzards can last 20 days. Winds reach speeds of 125 miles per hour; temperatures can plunge to minus 60 degrees. Annual snowfall exceeds 35 feet. During storms, two or three men have to shovel snow at all times. If they stop, they will never catch up and the post will be buried alive."

"In such extreme cold, the single most important resource is kerosene. Known as "K2 oil," it is used for cooking, melting snow for water, thawing out frozen guns, and keeping warm. It gives off a noxious smoke that coats the igloos with grime; for months after they descend, soldiers cough up black gunk."

"Each summer in the Ghyari sector alone, more than 35 Pakistani bases, gun positions, and fighting posts have to be stocked with some 2,000 tons of ammunition, rations, and fuel. This material is freighted to Ghyari by truck and hauled up the ice on mule and donkey trains. To prevent snowblindness, the pack animals are equipped with specially made glacier goggles. Sometimes they stumble and plummet into the crevasses. "They scream for an hour until they freeze to death," one of the muleteers told me. "It is terrible to hear.""

"In settings like this, suffering is often transformed into legend. The Pakistanis tell of a post beyond Sia La, at nearly 22,000 feet, that is said to have three separate cracks in the ice known as Three-Man Crevasse, Five-Man Crevasse, and Eight-Man Crevasse—each named for the number of men who died falling in."

""After a bunch of guys take a shit, it's impossible to clear it away," Das explained. "Pouring boiling water on it, or banging on it with an ice ax, won't work—it just keeps building up. So those mounds, we would have to clean them with our machine guns. Cock an LMG—tacka-tacka-tacka—and it breaks into tiny pieces of rock-shit. They fly in the air. A couple times a week is enough.""

"From the top of Kumar, you have a splendid view of the Siachen's white skin, the white peaks that wall it in, and a dense ring of odd white pillars stretching out from every side of the base. These pillars are the remains of 19 years of parachute supply drops. Over time, as the ice has melted and refrozen, they have risen about five feet above the surface. Most appear to have a head, shoulders, and a torso. There are thousands of them, and from above they look disturbingly human."
"This scene is bizarre enough by day, but at night it becomes truly ghastly: a frozen necropolis of trash, a Golgotha of ice haunted by the spirits of the dead. When the wind subsides and the moon rises and you gaze out at the cordon of pillars shrouded in the pleated folds of the parachutes, it looks like you've been encircled by an army of ghouls, as if all the soldiers slain in these mountains have risen from their icy graves and gathered before Kumar to stand in mute judgment of what they have done to one another, and to the balance of nature. "This is the most depraved thing I've ever seen," Teru whispered one night. "I don't know if this is war. But it's definitely hell.""