All avalanches are of course bad, but this one was especially bad:  five dead (reportedly four Swiss, one French), from a ship-based tour (i.e., think mobile floating hut).  Only one buried victim survived, who according to a TGR poster from Svalbard was a guide, buried up to his neck.  Dale Atkins reports that a touring group of 12 was split into two separate parties of 6 each, so that implies that all members of one party were buried, with only the guide surviving.
Dale Atkins also reports that as many as eight helicopters transported rescuers and victims, and that the Royal Norwegian Air Force flew at least one F-16 for observation assistance.
As shown in the picture below, a very wide crown line (reportedly spanning one kilometer), and with lots of vertical relief, funneled into a relatively narrow runout zone.  One victim was extricated from beneath six meters of snow.  [Update:  the deepest burial was actually eight meters.] 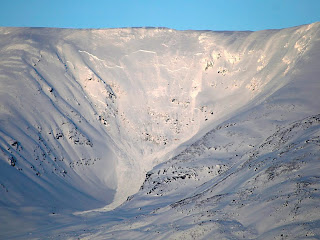 Same picture below, but with a circle around a Sea King helicopter (barely visible) to convey scale (thanks to another TGR poster from Norway):

Picture from a different perspective:

Some additional details in this Washington Post write-up.
Educational angle?  A TGR poster states that the name of the mountain in the indigenous people's tongue translates as The Deadly Mountain.  With terrain like this, you had better be 100% sure that the snow is 100% stable.  All victims are thought to have been equipped with airbag packs, with at least two "successful" deployments, but entrainment in an avalanche like this is nearly hopeless.
Also, when in a group, always observe, think, and act as if you are alone.  Even with professional guides, be involved in the decision making process, and if you have concerns, then speak up.
Anyone can make a mistake, professionals included.  And even if you agree entirely with the guide's decisions, being involved in the process will help prepare you better for unguided tours.
Posted by Jonathan S. Shefftz at 10:15 AM