Still very early for any solid news, but the grim count so far seems to be nine confirmed dead, another four missing, and eleven hospitalized.

Edit:
Accordingly to an apparently more recent report, the four previously unaccounted-for climbers are now safely accounted for.  (Two had taken a different route, and another two had cancelled their climb entirely.) 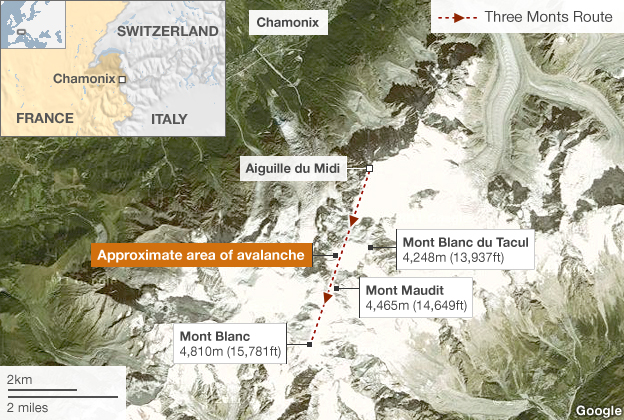 The initial account (and the map) is from the BBC.

But a more updated account from the Associated Press has this assessment of the slide mechanics:

A block of ice 40 centimeters (16 inches) thick broke off and slid down the slope, creating a mass of snow that was 2 meters (6 feet) deep and 50 meters (160 feet) long.
"The first elements that we have from testimony are that a climber could have set loose a sheet of ice, and that sheet then pulled down the group of climbers below. I should say the incline was very, very steep on this northern face," Col. Bertrand François of the Haute-Savoie police told reporters.